Mr. Friedman’s legal practice is primarily litigation driven. As a defense attorney in various civil matters, Mr. Friedman has represented a wide array of corporate and professional interests. Mr. Friedman at one time defended the Governor of Alabama in a civil lawsuit, he successfully represented a rival head SEC football coach in a hostile venue (Tuscaloosa), and in another case, he defended a regional airline in the worst air disaster in the history of Alabama. He has litigated a number of cases including personal injury, professional liability, employment, product liability and fraud cases.

Mr. Friedman is a frequent speaker at client seminars and professional organizations. He has spoken and authored articles for the International Society of Explosives Engineers. Mr. Friedman has also lectured for the Alabama Bar Institute and Cumberland School of Law continuing legal education programs. Mr. Friedman has successfully pursued environmental lawsuits for individuals, businesses, cities and municipal water authorities in venues across the South and been the speaker at environmental law seminars involving state regulators, businesses and attorneys.

Mr. Friedman is admitted to practice in all Alabama state and federal courts as well as the United States Eleventh Circuit Appeals and the United States Supreme Court. Mr. Friedman has litigated in over thirty counties in the State of Alabama and has been admitted, on a pro hac vice basis, to litigate in the States of West Virginia, Tennessee, Kentucky, Georgia, Texas and Oklahoma. Mr. Friedman is a Fellow of the America Board of Trial Advocates and holds an AV rating by Martindale-Hubbell which is the highest rating for an attorney bestowed by that organization.

As a founding partner of the firm in 1998, my greatest professional honors are not tied to individual accomplishments but the growth of our firm which we measure in reputation, and not size. Our firm has been hired on many occasions over larger and older firms because of our good reputation and track record. Recently we were retained in a mass tort case referred to by in house counsel as “bet the company” litigation. We are honored to be able to provide meaningful litigation experience, practical efficiency, and the ability to deliver results to our clients.  We are cost conscious and goal oriented.

• Obtained defense verdicts in transportation and trucking lawsuits in venues across Alabama.

• Successfully represented trucking companies in Multi-District Litigation against a major gasoline supplier for breach of contract and fraudulent conduct.

Jeff Friedman has been a long time member of the Cumberland Law School Dean’s Advisory Board and serves on charitable organizations such as Cystic Fibrosis. He is a member of Canterbury Methodist Church, is married to Anise C. Friedman and is the proud father of three great children. 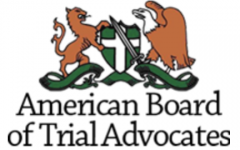